My wife never believed I could go back to school. Mr. Lawrence White 44year old man hawking doughnuts while neatly dressed went viral, the Akwa Ibom-born father of two has suddenly transcended from a little known Nigerian to a celebrity of sort. From east to west, north to south, images of Udoka are almost now a common sight anywhere you turn to. It is an unprecedented period for him. 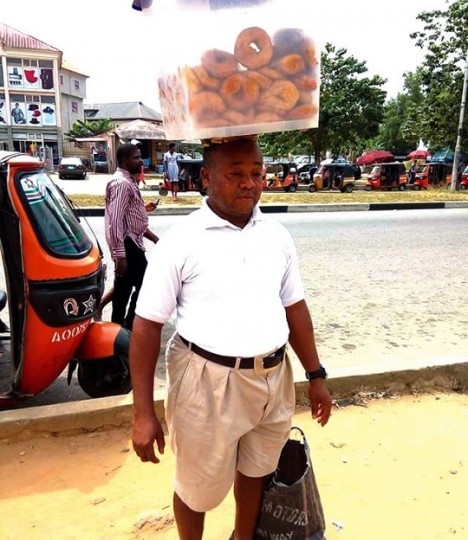 “I have received a lot of calls from people telling me that they have been seeing and reading different interesting things about me on the social media. Whenever I go out to hawk these days, people treat me differently, as if I am a superstar. Though I am excited about this I give all glory to God,” he said during a telephone conversation with our correspondent earlier in the week.

But beyond the fame the 44year old man now enjoys, Udoka has been through the rough patches of life, contending with deprivation and crushing hardship for the most part of his early life. Raised under the roof of a polygamist father with three wives and 10 children, life for him as a little boy growing up in the countryside in Akwa Ibom where he hails from was tough. Apart from the difficulties in accessing quality education as a result of his father’s lean purse, living out his dream of becoming a successful engineer in the future was quite Herculean. The situation remained troubling until he finally made the long journey to Lagos, Nigeria’s commercial headquarters, in search of a new life.

“It was tough when I first arrived Lagos,” Udoka said, as he shared his inspiring story with our correspondent. “I was rejected in almost all the factories I went to search for job not because I wasn’t fit but because the people there always felt factory work was not for a person like me.

“At one of such places, a staff of the factory where I had gone to look for work told me that I should go and get proper education, that he saw me becoming something big in the future and not limiting myself to a factory. That was the last time I ever went out to look for job again,” he revealed.

Driven by the quest to survive, Udoka soon ventured into frying and selling bean cake popularly known as akara in local parlance around his Ojota neighbourhood. It turned out a big hit. Within weeks after he started, everyone was looking for his brand of akara. It was a period of boom for him.

“People would come from very far places just to buy my akara. It was as if they had been waiting for the type that I did for a long time. I was never short of patronage,” he said.

But just when the 44-year-old was enjoying the fruits of his labour and thinking on how to expand his business to meet the growing demand, everything came crashing. A malicious rumour turned the tables against him.

“I was surprised when all of a sudden people stopped patronising my akara,” he recalled. “There was a rumour in town that a man somewhere in Mushin was caught using human blood to prepare his akara and that had a negative impact on the patronage of the snack. It affected many of us in the business tremendously. I had to gather the small money I had managed to save to buy a motorcycle for commercial transportation,” he said.

Few months into commercial transportation, the father of two switched vocation again – this time going into baking and hawking doughnuts, egg and fish rolls after a woman introduced him to the business. He abandoned transportation following constant harassment by law enforcement agents in Lagos.

“I didn’t ride okada for too long because law enforcement officers were always harassing us and demanding for money. I had to diversify into the making of doughnuts and other items after a woman introduced me to the business. I look back today and I am happy I ever made that decision,” he said.

Like akara, Udoka’s new products also gave him popularity in the entire Ojota/Ogudu area of the metropolis where a lot of people fondly nicknamed him “chop better” – for the richness of his snack. Though he didn’t make as much as when he was marketing bean cake, the new items also brought in a decent income. But more than the sweetness of his products, it was his mode of dressing that attracted customers to him the most – the Akwa Ibom native was always looking smart and neat while hawking his wares.

“A lot of women always told me whenever they came across me that if they were mine they would never allow a neatly dressed man like me to hawk. But unknown to them I was married already.

“I had to always dress well because the Bible says that whatever our hands findeth to do, we should do it well, so I had to apply wisdom into my business. Dressing well was one of the strategies I have used to grow my business. It is a way of appealing to customers who ordinarily wouldn’t even think of buying doughnut at the time,” he said.

But beyond the regular profit he was making from the business and all the attention that followed, the 44years old had bigger dreams. He wanted something that would open doors for him, a more guaranteed route to escape poverty and all the sufferings that he had experienced in his life. To make that dream a reality, he enrolled for the 2015 Unified Tertiary Matriculation Examination to study Political Science Education at the University of Uyo, Akwa Ibom. The idea came not only as a joke to many who knew him including his 41-year-old wife, Dorothy, but also as a feat impossible to achieve.

“My wife felt I was playing an expensive joke when I told her of my desire to go to the university by sitting for UTME,” he said. “She felt because of my age I should rather invest in our children instead of going to school myself. But that didn’t deter me, I insisted and God has been faithful.

“Even though I was always busy hawking my items, I enrolled for tutorials at a centre in Ojota to prepare me for the exam. Many times I went there with my snacks and while receiving lectures some students would patronise me. I never missed tutorials for once.

“I have faced a lot of hardship in my life, so I didn’t want to go the rest of my life like that. I realised education was the gateway in life. I knew if I could get education, many of my problems in life would be solved. All the while I was selling akara and riding okada, I had always nursed that desire to go to school. I had hope that one day I would be enlisted into one Nigerian university and by the grace of God that dream has come true,” he said with a tinge of fulfillment.

Attaining that feat didn’t come easy, challenges in different forms came his way. While some made subtle jests at him, others told it to his face that he was only wasting his time. But the more they tried to discourage him, the more his resolve grew stronger.

“A lot of people sometimes wondered what an elderly person like me was coming to do at the UTME tutorial centre. In fact it took a long time for even the security men at the place to accept that I was also a student coming for tutorials.

“But by the grace of God when the result came out, I was vindicated. I scored 333 in the exam even though I was 43 at the time and was combining hawking and studying. I and my daughter, Favour, sat the exam at the same time and we both did well.

“I am studying Political Science Education at the University of Uyo, I was admitted as a full time student but I asked to switch to part time so that I can continue to do my business. My daughter is studying Public Administration at the same university and we are both in 200 level.

“Many of my lecturers today use me as a reference point in some of their teachings. They salute my courage and determination to succeed at all cost.

“I must let you know that I don’t miss lectures because I don’t like to copy other people’s notes. A lot of useful things are said during lectures, so I don’t like to miss them. I have never failed any course since gaining admission. Many people see me as a role model,” he said.

Apart from attributing his success so far to the mercies of God, Udoka also fingers his unique mode of appearance as playing a key role in his wide acceptance even in Uyo where he had stayed less than two years since gaining admission into the city’s university. He receives favour in torrents.

“People favour me a lot,” he cuts in. “Many times customers tell me to keep the change and use it to take good care of myself when they patronise me.

“In fact in 2012, the commissioner for environment in Lagos at the time during a chance encounter told me that he liked the way I dressed and conducted my business and that he would love to assist me with some money. He gave me N100, 000 and it was out of that money that I registered for UTME.

“Here in Uyo, people patronise me a lot. They look at my dressing and ask why I returned from America. They think I had lived abroad before and only came back as a result of certain circumstances.

“After arriving here, I had to go to a catering school to acquire more skills for my business. I am a qualified caterer now; a lot of people have been coming to learn from me,” he said.

The future is looking brighter than it was a few years back, the 44year old is already looking forward to better things to come. But while making those lofty pursuits, he has not forgotten the woman that has stood by him all these years. Her place in his heart is special.

“It is my heart desire for my wife to also go to the university after I graduate,” Udoka, sounding a bit emotional at this point, said. “She has been very supportive; she has been a strong pillar behind me. Since I and Favour moved to Uyo for studies, she has been taking care of the home, herself and our 17-year-old son, Donald. I cannot thank her enough for all the love, support and understanding.

“In life, when you record success people will begin to see you differently. My wife sees me differently and appreciates me the more now. Recently she was in Uyo to spend one week with me. I really appreciate this. My wish for her now is to see her attain the level of education I have now. It will make me happy.”

Dorothy, who runs a thriving food stuff business at the New Garage area of Ojota, said earlier in the week that she was proud of her husband even though she initially feared he was too old to study.

According to her, a lot of persons who have been following her husband’s rising profile have called to commend her as well.

“I am very proud of him, me and the children; he is making us very happy. Though I had some reservations when he was pursuing admission, today I give glory to God because he has given us a new song. I know that by the time he and Favour graduate, our lives would change for the better. I feel joy all over my soul,” she said.